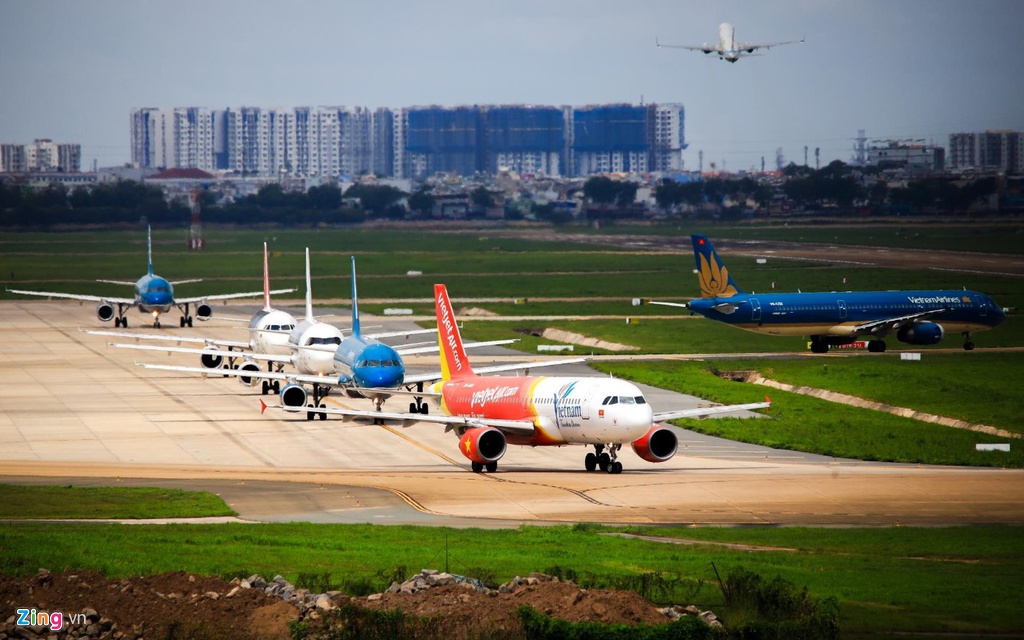 AirAsia gave up establishing a joint venture in the Vietnamese market, Vingroup stopped the project of Vinpearl Air. It seems that the big companies are hesitant because the Vietnamese aviation market is saturated.

January 14, Vingroup suddenly announced that it will officially withdraw from the air transport business. The business of billionaire Pham Nhat Vuong is the second largest man to abandon the Vietnamese aviation market in less than 3 months.

The domestic aviation market is showing signs of saturation because the bottleneck in aviation infrastructure seems to be the most reasonable answer to this trend, besides the internal problems of each enterprise.

The phrase "overcrowded airport" is becoming more and more popular. Many experts believe that the overload of aviation infrastructure is a positive sign, showing that the transport industry is growing stronger than expected. However, it is undeniable that the inadequacies when airports are always operating in a state of exceeding design capacity.

A leader of the Civil Aviation Authority of Vietnam once shared that in the period 2008-2019, Vietnam's aviation industry grew an average of 17.1%/year in terms of passengers and 13.8% in cargo volume. In the first 6 months of 2019, it can be seen that Vietnamese aviation is growing slowly, at only 9.8%.

In December 2019, Mr. Lai Xuan Thanh, CEO of Airports Corporation of Vietnam (ACV), also confirmed that the entire airport system is operating far beyond the design capacity, proving the overload of the infrastructure.

While the level 2 and 3 airports in Vietnam's flight network are still operating at adequate capacity, the burden is on the airports of Da Nang, Noi Bai and especially Tan Son Nhat.

Vietnam's largest airport has a current design capacity of 28 million passengers per year, but in 2018 welcomed more than 38.3 million passengers. Having to bear the burden of about 37% of Vietnam's air traffic each year, Tan Son Nhat is overloaded.

Not only overloaded on the ground, Tan Son Nhat is also carrying 800-900 takeoffs and landings per day, almost equal to the maximum take-off and landing capacity.

The fact that the two leading airports, Tan Son Nhat and Noi Bai, have not been able to increase their capacity, has inhibited the growth of the golden airport Ho Chi Minh City - Hanoi. This is a flying shaft OAG rated as the 4th busiest flight axis in the world in 2019 and is the main flight axis of Vietnamese aviation.

Without a new flight slot, new parking space, and new terminal, it will be difficult to have more space for big players who want to join the game like Vingroup or AirAsia.

Sharing with the press about Vingroup's decision to withdraw from the air transport business, Mr. Nguyen Viet Quang, Vice President and General Director of the business, said: "Vingroup's strong investment in aviation can leading to oversupply, causing waste to society, and at the same time we also need to focus resources on developing our technology-industrial segment, so we decided to withdraw.”

The view of Vingroup's leaders shows that this company recognizes that there is not much room for Vinpearl Air when the competition between old and new airlines in the Vietnamese market is very fierce.

Used to be a phenomenon of Vietnamese aviation, considered a hot growth, but 2019 has been recorded Vietjet Air must be on the defensive in the domestic market. In 2019, the airline lost about 5% domestic market share to competitors while increasing international routes.

This is a consequence of Vietnam Airlines' strong competition with the sale of super-saving seats at prices close to those of low-cost airlines.

However, the national airline also cannot avoid losing market share when it decreased from 34.5% market share to 33.3%.

The good business of Jetstar Pacifics in 2018 cannot help it avoid the general trend. The airline lost about 4.4% market share in 2019.

This competition comes from players who have just entered the market since January 2019, Bamboo Airways. By the end of 2019, the airline held more than 10% market share after one year of commercial flight, equivalent to Vietjet Air during the period of explosive growth.

The fact that the iconic airlines of Vietnamese airlines still suffer from loss of market share shows the fierceness of the market. The space for new airlines according to the authorities is still there, however, in fact, this space is mainly located in the niche routes, in the context that the golden triangle of Ho Chi Minh City - Da Nang - Hanoi is close. as "closed to the ground".

This explains the withdrawal of both AirAsia and Vinpearl Air. Follow OAGVietnam's aviation industry is the world's second fastest growing market in the period 2009-2019. However, to maintain this growth momentum and create more room for new airlines, many experts assert that the infrastructure bottleneck needs to be removed soon.

PrevPreviousIn the 'fire pan' of debt at the end of the year
nextHundreds of millions of dollars from Japan, Korea, Singapore and especially China are waiting to be invested in cheap houses in Vietnam.Next