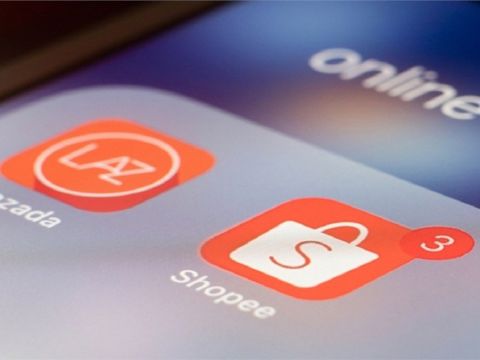 Shopee and Lazada continue to compete for the top spot in the Southeast Asian market and Tokopedia, Tiki and Sendo have also made great strides.

Shopee and Lazada continue to compete for the top spot in the Southeast Asian market and Tokopedia, Tiki and Sendo have also made great strides.

The Southeast Asia E-commerce report released by iPrice Group, App Annie and SimilarWeb recently said that Shopee and Lazada both have strong mobile applications, with a high number of users in the third quarter.

In particular, Lazada topped the rankings in 4 out of 6 countries studied including Malaysia, Philippines, Singapore and Thailand. No less, Shopee ranks first in Indonesia and Vietnam, two markets ecommerce rated by Google as having the highest development potential in Southeast Asia. 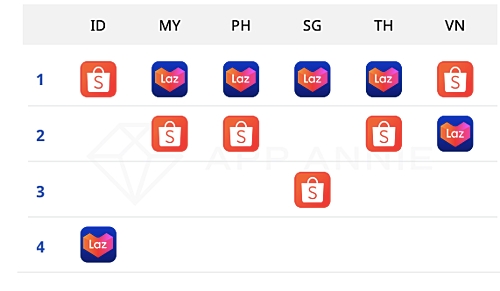 Lazada and Shopee's ranking of e-commerce applications with the highest monthly users in the third quarter in markets (from left to right) Indonesia, Malaysia, Philippines, Singapore, Thailand, Vietnam. Source: iPrice

In early December, Lazada also launched a "new trick" with the first committed on-time delivery service in Southeast Asia. Accordingly, when buying products from LazMall's booth, they will be committed to the delivery time and be compensated if they are not on time. The service is rolling out simultaneously in Malaysia, Thailand, Indonesia, Vietnam and the Philippines.

Lazada's move comes when Shopee is about to hold a shopping festival on December 12 to celebrate its birthday. So far, the promotion campaign for the program has been simultaneously "aired" throughout Southeast Asia with offers such as free shipping, refunds, winning iPhones, Shopee Live livestream, playing virtual reality game Shopee Catch...

Besides the two "rivals" Lazada and Shopee, some other notable exchanges in the Southeast Asian mobile app rankings are Tokopedia, a unicorn from Indonesia, along with Sendo and Tiki of Vietnam. .

Specifically, mobile applications of Tiki and Sendo ranked 8th and 9th in the region in terms of monthly users, respectively. Sendo alone also appeared in the top 5 most downloaded e-commerce applications in the last quarter. Previously, according to the e-Conomy SEA 2019 report, Sendo and Tiki were also evaluated by Google as having the potential to become technology "unicorns" in the future.

While the mobile application continues to be the competition of Shopee and Lazada, on the website platform, domestic companies are winning. In Indonesia, Tokopedia continued to lead the ranking of website traffic in the third quarter. According to some sources, this company is aiming to raise capital up to 1.5 billion USD.

In Vietnam, Sendo, Thegioididong and Tiki all ranked above the "giant" Lazada in this ranking, respectively. This is also the first time that Sendo has been in the top 2. And after many consecutive quarters of growth in website traffic, Sendo recently completed an additional funding of 61 million USD.

E-commerce websites with the highest number of visitors in the third quarter of 2019 by country. Source: iPrice

The iPrice report also points out the new trends of Southeast Asian e-commerce from the beginning of 2019 to the present.

The first, 9 out of 10 applications with the highest number of users in the third quarter belonged to multi-industry exchanges. This shows that, when choosing to shop on mobile, Southeast Asian consumers tend to prefer apps that provide a variety of product choices.

Monday, the report noted the unexpected appearance of Wish - an e-commerce application from the US - in Southeast Asian markets in the last quarter. In just one quarter, Wish has crept into the top 10 e-commerce apps in 5/6 countries (excluding Vietnam) and is the fourth most downloaded app in the entire region. In the US, Wish is famous for its ability to provide a wide range of products at low prices and to suit the niche needs of buyers.

TuesdayAnother obvious trend is the rise of “shoppertainment”, which is a combination of shopping and entertainment. This year, almost all exchanges ecommerce All major companies are testing the livestream feature right on the shopping app, and at the same time linking up with entertainment stars to attract viewers.

Lazada first launched the feature in March and invited female artist Dua Lipa to perform on their birthday. Shopee is no less competitive when launching a similar feature in June with a contract with superstar Ronaldo for the 9/9 shopping festival.

During the 11/11 shopping festival, Shopee Philippines held a livestream that lasted up to 12 hours. In this program, many gifts and discount codes were launched, including 5 iPhone 11 phones.

In Vietnam, after a trial period, last September, Tiki also launched the TikiLIVE feature right on the mobile application. A quarter after this feature launched, Tiki moved up one place on the download chart in Vietnam, surpassing Lazada and entering the top 3 nationwide.

PrevPreviousUniqlo: From a store in a remote city in Japan to a global fashion empire
nextTRESemmé enters the haute couture gameNext