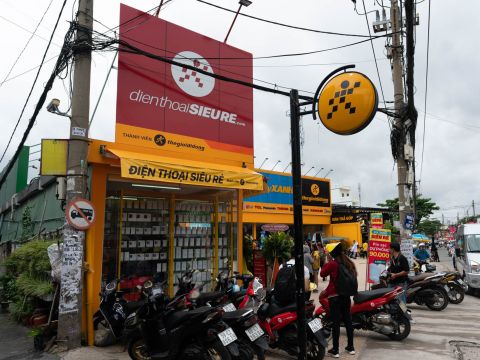 Mobile World said that the revenue of each Super Cheap Phone store reached more than 500 million VND/month. The company will continue to test this new model in the provincial market.

Mobile World said that the revenue of each Super Cheap Phone store reached more than 500 million VND/month. The company will continue to test this new model in the provincial market.

Besides the 3 chains of Mobile World, Dien May Xanh and Bach Hoa Xanh, 2 new business segments are being tested by the retail giants, including the chain of Super Cheap Phone stores and the laptop centers for the first time. The top is revealed the results of the operation.

Super Cheap Phones will expand to the provincial market

After 2 months of testing the Super Cheap Phone model, there are 11 selling points in Ho Chi Minh City. These are stores that only deal in products priced under 8 million VND, with an area of 15-20 m .2, does not install air conditioning and has only 1 employee to save maximum operating costs.

Mobile World said that the revenue of each Super Cheap Phone store is more than 500 million VND/month. This figure is higher than the 350-450 million dong/month (about 15 million/day) that the CEO of the Mobile World chain and Dien May Xanh Doan Van Hieu Em revealed in early September.

The Super Cheap Phone model will continue to be tested in provincial markets in the near future after the above positive results.

In addition to Super Cheap Phones, in the third quarter, Mobile World also opened 26 laptop centers in many provinces. Besides, there are nearly 150 more stores of The Gioi Di Dong and Dien May Xanh selling this product, bringing the number of laptop selling points of the system to nearly 500.

Mobile World said that on average every day in September, about 1,000 laptops were sold throughout the system. The laptop industry is expected to earn VND 2,700-3,000 billion in 2019, an increase of 25-30% over the same period last year. 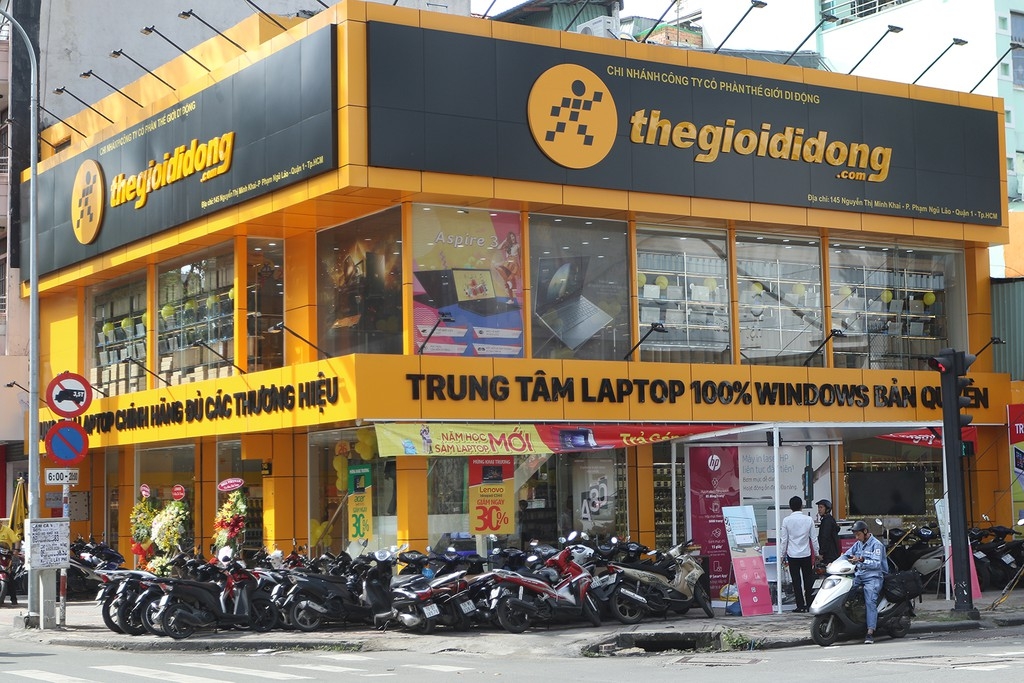 The long-term goal of Mobile World is to take 50% laptop market share compared to the current 20% level, equivalent to 6,000-7,000 billion VND/year in revenue.

For the watch industry, this retail system said that the number of products sold in September was about 50,000 thousand units with 134 points of sale. After 7 months of business, a total of more than 150,000 thousand watches have been sold. This industry is expected to contribute 500-600 billion VND in revenue this year.

In the revenue structure of the group, the contribution ratio of Bach Hoa Xanh after 9 months is 9.3%, nearly double the level of 5% at the end of 2018. Bach Hoa Xanh CEO Tran Kinh Doanh shared the goal of increasing The proportion of this food chain's revenue will increase to 10% by the end of 2019.

Mobile World's report explains that due to the seasonality, in the rainy months 8-11, the quality of goods supply and the consumption of fresh goods in the evening peak hours are affected.

The company said that it has adjusted the selling price of fresh food in some time frames as well as will experiment to strengthen the frozen goods area to optimize output and reduce the influence of seasonality.

Lowest quarter in the third quarter according to the business cycle

Mobile World's revenue in September alone was VND 7,908 billion, profit after tax was VND 279 billion. This is the company's lowest monthly net profit since the beginning of the year, excluding February with the Lunar New Year holiday.

The company explained that according to the business cycle, third-quarter sales are often lower than the first two peak quarters of the year. However, revenue in the third quarter of this year still increased slightly compared to the first quarter. 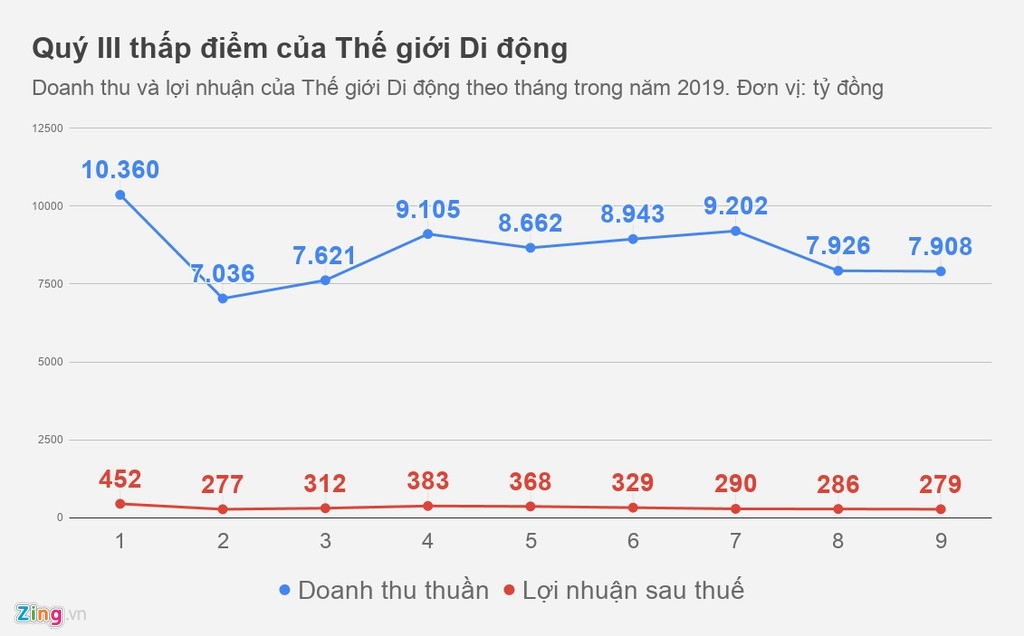 However, the ratio of selling expenses to net sales of Mobile World also increased as the company opened 257 new stores in the past 3 months, averaging 2.8 new points of sale per day. This is the fastest expansion rate in enterprise history.

Because new stores need to be prepared before opening but do not operate for a full month, the ratio of operating expenses to sales in the opening month is higher than that of points of sale that have been operating stably. Third quarter net profit was therefore affected, lower than the first two quarters by about 20%.

However, this target still increased by 32% compared to the third quarter of 2018. The accumulated gross profit margin of 9 months thus reached 3.9%, higher than the same period last year was 3.3%.

By the end of September, the entire Mobile World system has 2,706 stores. Mobile World chain has 1,011 stores including 11 Super Cheap Phone stores. Dien May Xanh chain has 907 stores. Bach Hoa Xanh has 788 stores.

In the revenue structure after 3 quarters, Dien May Xanh chain accounted for 57.4%. Mobile World Chain accounts for 33.3%. The remaining 9,3% is contributed by Bach Hoa Xanh.

Online sales accounted for 13% of the company's total revenue after 9 months. Online revenue in September reached VND 903 billion, up slightly from VND 899 billion in August. This is the second consecutive month that Mobile World's online revenue has grown after 4 months of decline since the company was unified. prices in stores and online.